A downloadable game for Android

Basic build: tap the safe boxes to add money, hold finger on the cats to make them purr and increase the money in the safes. Buy devices, which increase the cats' happiness to earn more.

Work is going on. The game will be embedded into the whole network of incremental games by Airapport, which are connected with a set of ingame "Portals".

This is solved by players' touches, as well as by the machines, which the player buys. The machines work in the idle mode, too.

Next game stage allows the player unlock new cats. Currently 5 cats are implemented into the game

10 more cat breeds are planned to be added.

The next progress wall in unlocking game contents is overrun by transporting money from one cat's safe to another, and with increasing coefficients applied. 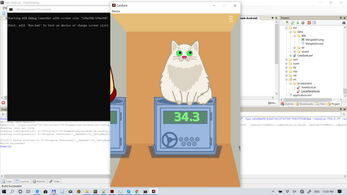